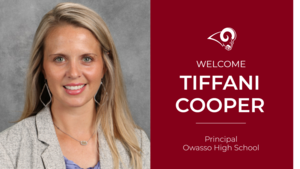 The Owasso Public Schools Board of Education approved the hiring of Tiffani Cooper as the new principal of Owasso High School at its monthly Board Meeting on June 20.
----

OWASSO — The Owasso Public Schools Board of Education approved the hiring of Tiffani Cooper as the new principal of Owasso High School at its monthly Board Meeting on Monday night. She will begin her duties at the high school on July 1.


Cooper, who was honored as the 2012 Owasso Public Schools Teacher of the Year, makes the move back to OHS after serving the last three years as the first principal of Lucille Ellingwood Morrow Elementary, which opened in the fall of 2019. She also served as an assistant principal at OHS from 2015-19.


"I am extremely proud to announce that Tiffani Cooper will step into the role of principal at Owasso High School,” OPS Superintendent Dr. Margaret Coates said. “Ms. Cooper is a thoughtful, dynamic leader who has a passion for reaching every student. She encourages excellence in teaching and learning and shares this enthusiasm with teachers, parents, staff, students and the community by focusing on the positive and celebrating successes. With her collaborative approach to leadership, her constant search to improve student success and her vision to lead, Tiffani Cooper will be an exceptional high school principal."


“I am truly honored to serve in the role of principal at Owasso High School,” said Cooper. “OHS has an incredible team and a reputation for excellence. Having spent the majority of my career in education there, it feels like I am returning home. I am excited for the work ahead.”


Cooper has spent her entire career in Owasso Public Schools, beginning in 2007 as an English teacher at the high school. For her efforts, she was named the OHS West Campus (known at that time as the Mid-High) Teacher of the Year in 2012 before being selected as the district’s top educator. Cooper then went through the Oklahoma Teacher of the Year process and was a Top 12 Finalist for the state’s top honor.


In addition to her role as a teacher, Cooper also served OPS as the Secondary Curriculum Coordinator and a TLE Instructional Coach during the 2013-14 school year.


Following her seven years as a teacher, she transitioned to administration in 2015 as an assistant principal at the high school. Cooper served in that capacity until she was selected as the principal to open Morrow Elementary, the ninth and newest elementary school in the district, prior to the 2019-20 year.


Cooper’s move to Owasso High School comes after the previous principal, Mr. Mark Officer, transitioned to the role of Assistant Superintendent of Teaching & Learning for the district in early June.